The Ads You Can Not See: 10 Best Native Advertising Examples 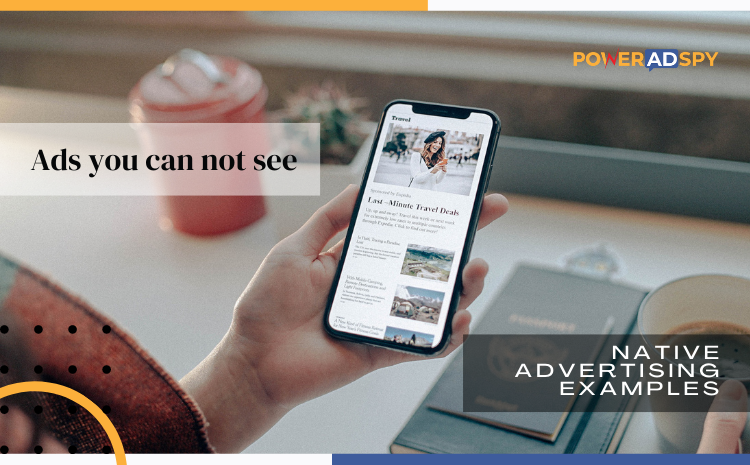 The Ads You Can Not See: 10 Best Native Advertising Examples

Customers’ tolerance for obtrusive advertisements is dwindling. Nobody enjoys being inundated with hundreds of ads. As a result, advertisers must get up their game and get inventive to make commercials less invasive. Native advertising is the most effective approach to achieve this.

Hit The Play Button to Listen:

What Is Native Advertising?

We’ve all seen it, but we may not have realized it. Native advertisements are adverts that mix seamlessly with the rest of the website’s UI. Native advertising is the best since it is less invasive than other ad types and appears to be organic content. However, there will always be some indication that the content is paid, endorsed, or partnered.

Sponsored articles on various news platforms or sites are one of the most frequent types of Native Advertising. Native advertising, on the other hand, can take many varied forms. In fact, you’re probably exposed to native advertising on social media regularly and aren’t even aware of it! There are numerous tools and platforms like PowerAdSpy available to assist you in being more active with your native ads campaigns.

There are 6 most common forms of native advertising:

“Search Ads” are another sort of native ad. You can find them by Googling almost anything. Search advertisements are always linked to websites.

Search Ads are sponsored search results that marketers pay to be at the top of the list. They can, of course, be found not only on Google but also on other search engines such as Yahoo! and Bing.

When you finally read an item online and see a box with more stories, such as “From Around the Web” or “Recommended By,” you’re looking at a Recommendation Widget.

Recommendation Widgets feature images and short descriptions that link to long-form material from an external source, such as a story,

What distinguishes this kind from In-Feed Advertising is that they do not display in the feed the user is scrolling through at random but rather in a designated box containing the ads. They are integrated into the website at the publisher’s discretion.

This native ad is only seen on eCommerce sites and similar sites. Promoted Listings appear in the same way as other products or services, but with a note indicating that it is an advertisement. Promoted Listings help emphasize and identify your product, resulting in increased sales.

This one is a little hard. An In-Ad is a typical, banner-like ad that appears outside the main text but contains valuable and relevant content.

In-Ads effectively increase brand awareness because they combine a business’s logo, image, and a bit of text, all connected to a landing page, and are well-targeted because they’re presented next to relevant content.

The IAB has designated a final category for any native ads that do not fall into one of the other categories. Companies are interested in an alternate yet prevalent platform for showing “custom” native adverts.

Native Advertising: What Not To Do?

“Don’t trick them. Don’t piss them off.” Eric Goeres

Goeres words of caution pertain to the trust between a publisher and its audience, and he stressed the hazards of offending readers by using deception and trickery to earn fast money. This was the counsel of Eric Goeres, Time magazine’s head of innovation, during the recent Contently Summit. Goeres spoke during the event’s “Truth in Advertising” session, which focused on the issue of native advertising.

Many individuals feel that native advertising is immoral since it is disguised. This is logical given the origins of native advertising. As mentioned, before the implementation of standards, firms frequently did not notify customers when they were being promoted to.

As a result, many took endorsements and suggestions at face value and believed them, only to discover later that they’d been duped.

Native advertising is popular among brands and marketers because it has higher click-through rates and engagement than traditional adverts. However, not everyone, particularly consumers, is smitten with native advertising.

Spotify’s native advertising strategy mixes innovation and curation. Stranger Things, for example, teamed with Spotify to advertise its second season, which included Spotify allowing users to turn on “Stranger Things Mode” and explore songs crafted for each of the show’s characters.

This native advertising example unit is more than simply a sponsored playlist (which they also provide) — it’s an immersive branded experience that suits both Spotify and Netflix’s personalities.

There’s no reason other publishers can’t create similarly innovative ad experiences: it’s all about understanding your audience and how to seamlessly integrate an advertiser into that experience.

A native ad displays a selection of related goods along the top of the product results page in this partnership with Pukka. This ad mixes in well with the rest of the page while not hiding that it is sponsored content.

Just because it’s advertising doesn’t mean your journalistic standards have to suffer. Even if it’s part of your marketing, thoughtful, long-form writing may be an excellent method to get your name out there and build a positive brand connection. And this is the perfect native advertising example of it. 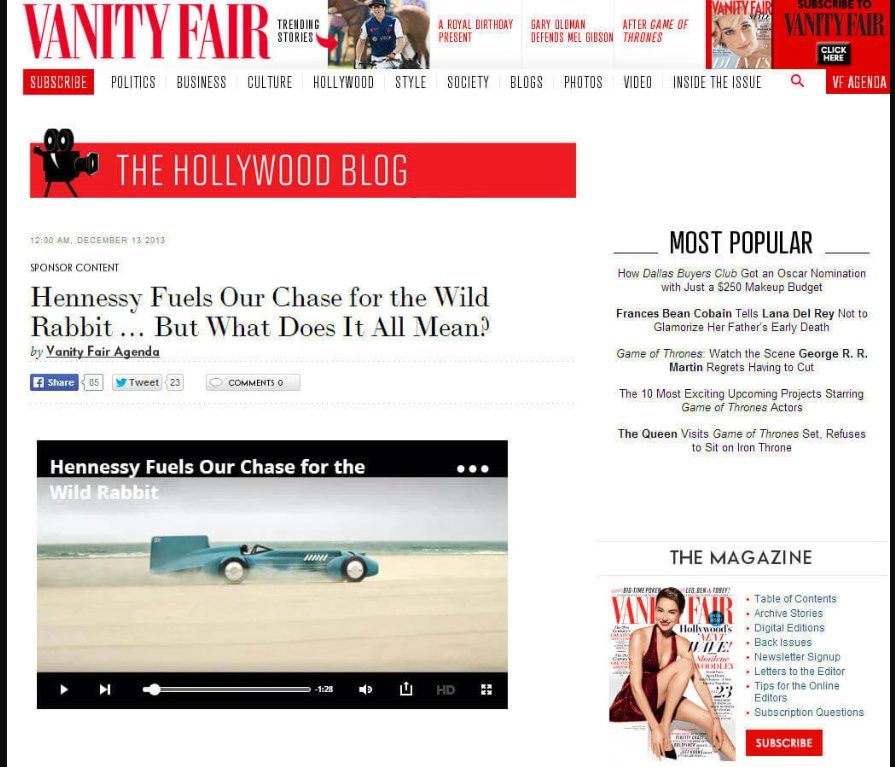 Vanity Fair has a long history of providing effortlessly stylish lifestyle news, making it a perfect platform for native advertising. Hennessy collaborated with the agency Droga5 to create a film. The content was written with the intent to get you behind the scenes of this legendary English racing car driver. It was to align with the drink maker’s Never stop, Never Settled campaign. And what could be better to market a fine whiskey than the Fastest man on Earth – Sir Malcolm Campbell.

The native advertising example is actually intriguing, in addition to establishing a subtle yet striking parallel between Campbell’s spirit of adventure and Hennessy’s “Wild Rabbit” marketing (“a metaphor for one’s inner drive to achieve,” according to the article). The obligatory product placement in the material is handled correctly, and it does not appear superfluous or tenuously placed alongside the subject matter. Finally, the piece is as elegant as a standard Vanity Fair feature, resulting in a reader-friendly experience. 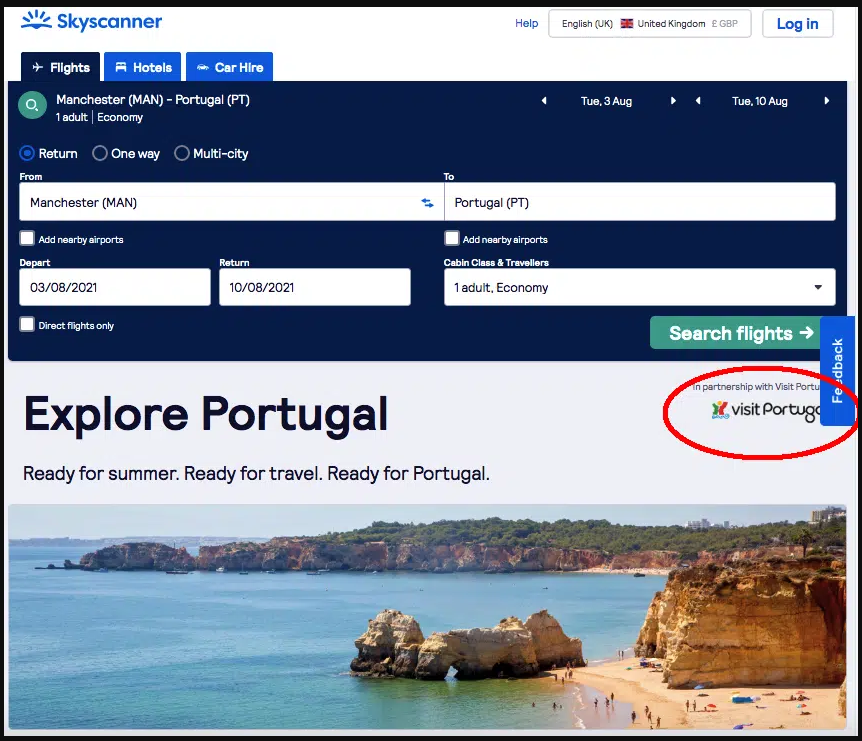 A flight comparison website is ideal for a travel company’s advertisement. This native ad shows on the site so that anybody looking for flights may see this stunning vista and consider booking a trip to Portugal.

The Native advertising example contains more than simply a picture. There’s information about the nation, including which cities to visit, and critical information regarding current travel restrictions — something that all travelers should be aware of. 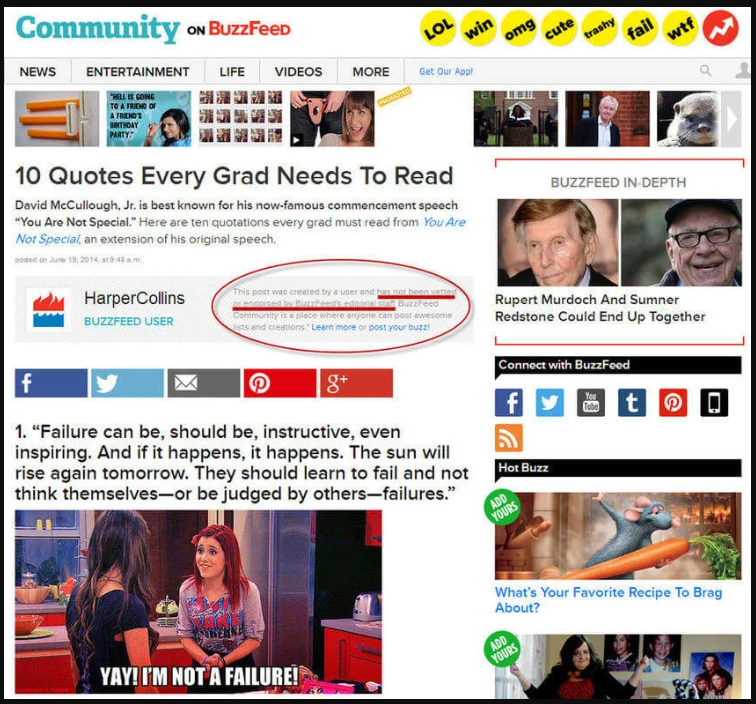 BuzzFeed, and Upworthy, are the most successful viral hit manufacturers on the internet. Is it any surprise that the site will eventually offer its prized viewership to wealthy sponsors? Consider the BuzzFeed “Community” sections, which feature companies such as publishing behemoth HarperCollins:

The success of this native advertising example is influenced by its timeliness. The piece was published in late June, just in time for graduation season. Second, the post was inspired by instructor David McCullough, Jr.’s renowned “You Are Not Special” graduating address, which became viral in its own right.

Apart from the implicit tie between college grads and books, there’s really no visible connection between the client (a big publishing firm) and the content; thus, the ad comes off as a “soft pitch,” which is more accessible for people to swallow than complex product placement.

When it comes to advertising, wit and ingenuity go a long way. This, combined with the real-world use of a product, such as gum on a first date, results in a memorable and successful native commercial.

“Dating Footnotes,” provided by Orbit, was released on the popular YouTube comedy channel CollegeHumor ahead of Valentine’s Day. It’s quick, hilarious, and capitalizes on the current holiday. Want to learn how to advertise on YouTube? Click here!

Orbit has a reputation for creating distinctive advertisements, so a native ad like this fits right in. This native ad also integrated well with the channel’s comedy where it was broadcast, promoting Orbit Gum’s goods without feeling like a typical commercial.

The New York Times and Snapchat:

Snapchat’s target market is Generation Z. Thus, the firm sought to make an effect. And when the chance arose, Snapchat seized it with both hands. During the 2020 election, Snapchat assisted over 1 million young people in registering to vote.

T Brand created biographies of five political activists who were voting for the first time. A Paid Post was published, offering an in-depth look at these people’s lives and their roles in battling racial injustice and climate change.

T Brand collaborated with Scheba Derogene to produce graphic pictures of these campaigners to get attention. Then, a print commercial was released, doubling down on Snapchat’s promise to get Gen Zers to vote. 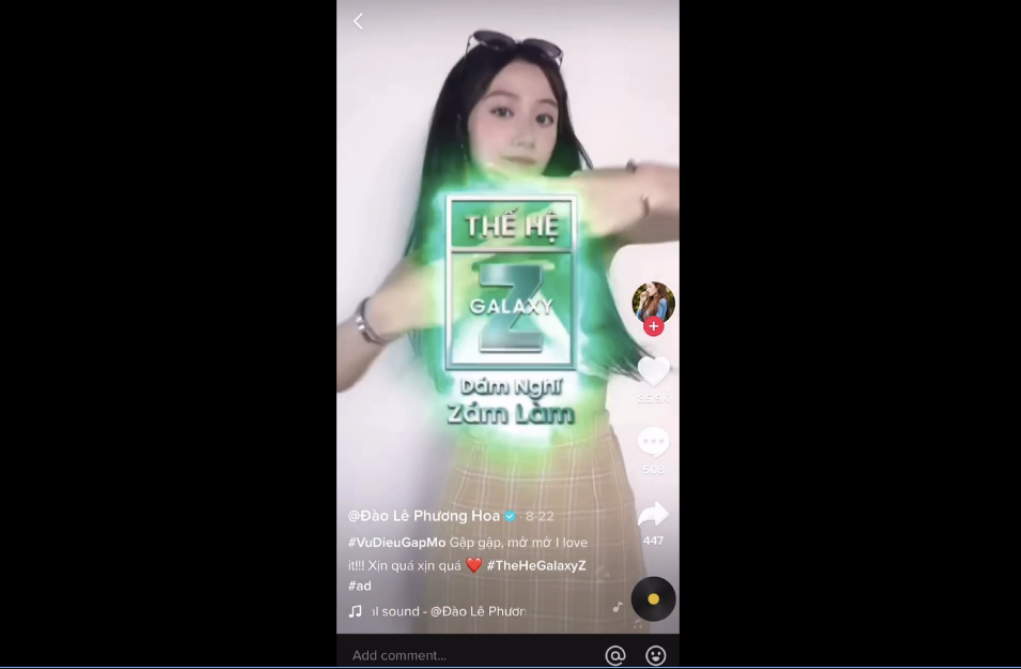 Samsung is well-known for its intriguing advertisements. The I’Mpossible Generation idea was created by Samsung to advertise the debut of their newest smartphone, the Galaxy Z Fold3. The brand invited consumers to dance along to the movements or create their own using a Branded Hashtag Challenge on TikTok.

The music was appealing, and the corporation increased participation by awarding awards to the best participants. The organization transformed this campaign into tremendous success by developing a comprehensive plan that targeted people through several touchpoints, including running TopView advertisements, Brand Takeover commercials, and Reach & Frequency ads.

If you are looking for a win-win situation, here’s the perfect native advertising example. A three-way collaboration between Eko, Tasty, and Walmart resulted in an entertaining interactive film that benefits all businesses involved.

The film leads viewers through the stages of cooking their own meatball meal, using Walmart supplies and Tasty recipes, all made possible by Eko’s interactivity!

PowerAdSpy is the most intelligent ad spy tool to empower you with the best winning ads from various platforms such as Facebook, Google, Instagram, Youtube, GDN, NATIVE, Reddit, Quora ads, etc. It has the world’s largest database of over 50 million ads listed. It has thousands of people worldwide watching and submitting the best trending ad copies.

If you are looking for running facebook intelligent ads and the best native advertising examples to get inspiration for your ad campaigns, you can easily find them with PowerAdSpy!

Check Out Our Latest Posts:

06 Simple Steps To Get Started With B2B Native Advertising
Things You Didn’t Know About Type Of Facebook Ads
Has Social Media Advertising Reached Saturation Point In 2022?

Native ads are mere tools for your advertising campaigns; you can win or fail at them. It will always come down to you, how you are using it. But with all the native advertising examples, you can get inspired and utilize the full potential of native advertising. If you want to get more such ideas, try PowerAdSpy and discover the world of winning ads.

Know More About Uses And Benefits Of Reddit Marketing