Bing Ads vs Google Ads: Where should you invest your Money?

With the online market expanding its wings every single day, digital advertisers get bombarded with tons of PPC networks, Google and Bing being on the top. Having been around for decades, they are the most preferred and trusted ones. But the question is- Bing ads vs Google ads- which one to choose?

First things first, both the platforms have a commendable ROI and show astounding results for any digital advertiser, and thus, one must try to utilize them both depending on the type of campaign. Here are some things that you can consider before choosing a platform for your next advertising campaign:

✔️ Which platform would get me more reach?

While a majority of PPC advertisers would view both the search engines as competitive platforms, they both actually work better hand-in-hand. It is very apparent that Google gets a majority of the search market, but you cannot forget Bing. Rather than Bing Ads vs Google Ads, the marketers should think about Google Ads and Bing Ads. Let us take a closer look into the 07 primary differences between both of them: 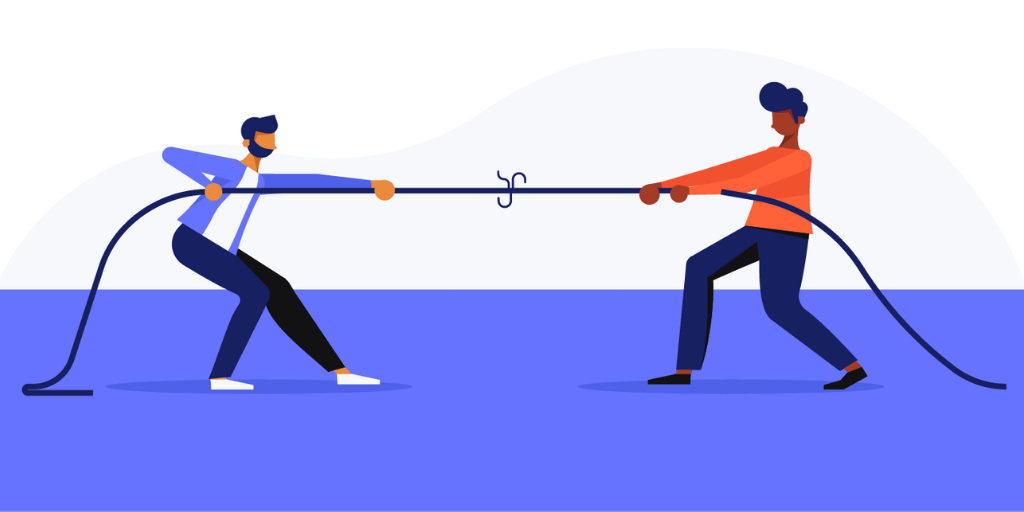 Before we proceed any further, keep in mind that the concept behind both of these platforms is the same. Both Bing and Google are PPC (pay-per-click) advertising platforms that help businesses and startups reach specific audiences, drive traffic, and increase revenue over time. Here’s a highlight of some of the differences between both of them:

There are two advertising networks associated with Google Ads:

1. Search Network Ads: These are the text ads that appear on the SERP (Search Engine Result Page) and may contain images.

2. Display Network Ads: These are the display ads that appear on a vast number of websites that you visit via the search engine.

Owned by Microsoft, Bing comes with three search engines- Yahoo, Bing, and AOL. It means that when you advertise on any one platform, your ads appear on all three of them. As a result, you get a plethora of audiences from more than one platform.

Apart from this major difference in Bing ads vs Google ads, we have some differences in the campaigns as well. Let’s get into the depth of it.

Let us see how both the platforms differ in their fundamental aspects to decide which one you should opt for in your next advertising campaign. 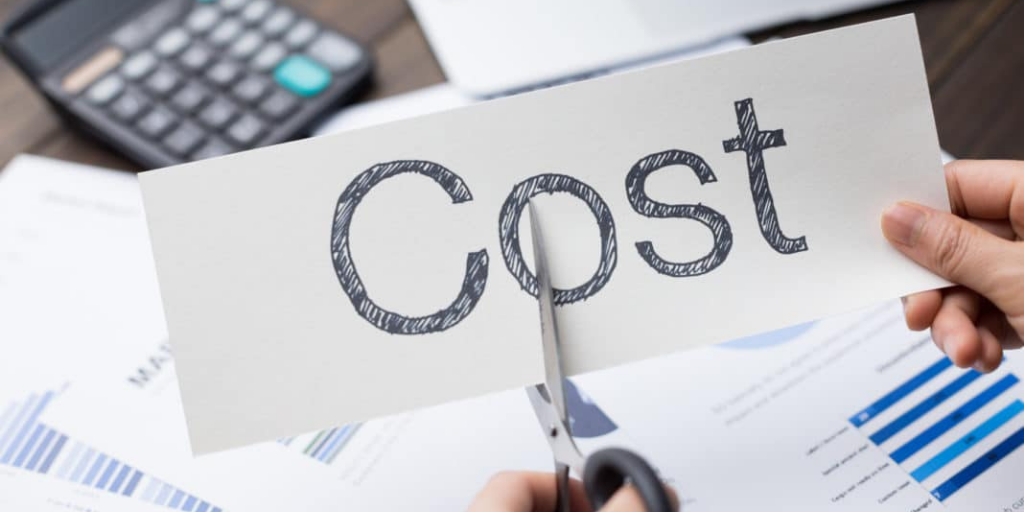 One of the crucial points to keep in mind before any campaign is the cost that the advertiser has to bear.

When working on a paid marketing campaign, one would like to get the most out of the least investment- meaning, keeping a close eye on the average cost per click. As you might already decipher, Google and Bing have different CPCs for the same keywords.

Due to its popularity, Google has a higher average CPS of $2, while Bing has a slightly lower CPC of $1.54. Keeping in mind that Bing will display the ads on more than one network alone, it turns out to be way more cost-effective than Google. But then we also have other factors such as which of them will more likely lead to a conversion.

On the one hand, Bing Ads have lower competition for the same keywords, and on the other hand, you cannot account for the quality and demographics of the audience that you get on its networks.

We will get into the details of demographics and quality of website visitors later in this article, but Google, in general, has higher quality traffic. It means that you will, most likely, spend more on the Google ads, but the conversion rate on it would be much higher as compared to the Bing Ads.

Btw, here are the Top 03 Mobile Advertising Platforms used by the Digital Marketers 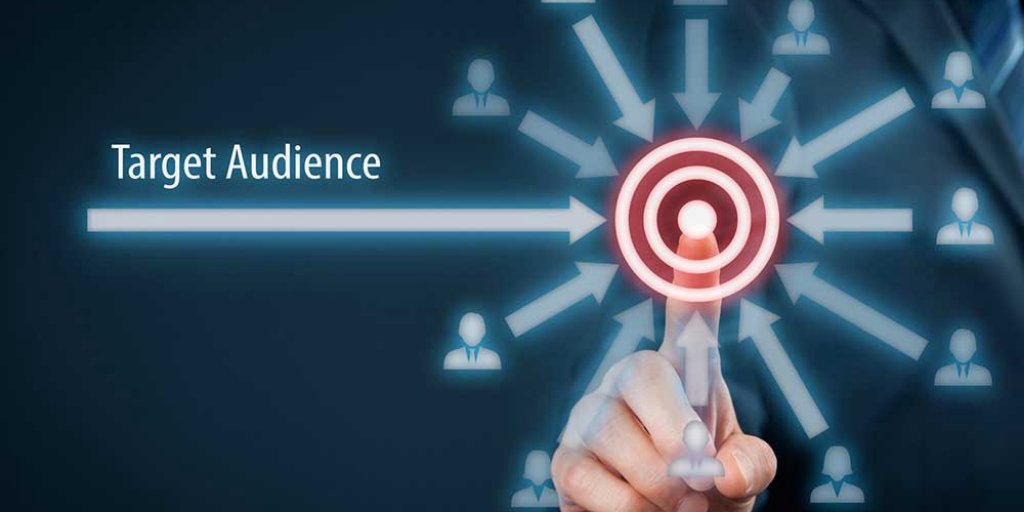 There is no assumption when I say that Google is the largest search engine in the world, with millions of visitors. Since Google search engine is a part of their ad campaigns, it is no brainer that Google ads get far more traffic than the Bing Ads.

However, Bing ads power a majority of Yahoo ads and searches. It, thus, makes sense to include Yahoo’s search engine market share of 1.6%- thus bringing Bing’s total market share to 3.92%.

In addition to the main search network, Google also has a third-party publishers’ network known as AdSense- providing advertisers with about 12 million websites on which they can advertise. Similarly, Bing ads also have their syndicated partner network, but there’s no number as to how big they are.

All-in-all, Bing has a lower market share as compared to Google. It means that they don’t have as much reach to offer to its advertisers. 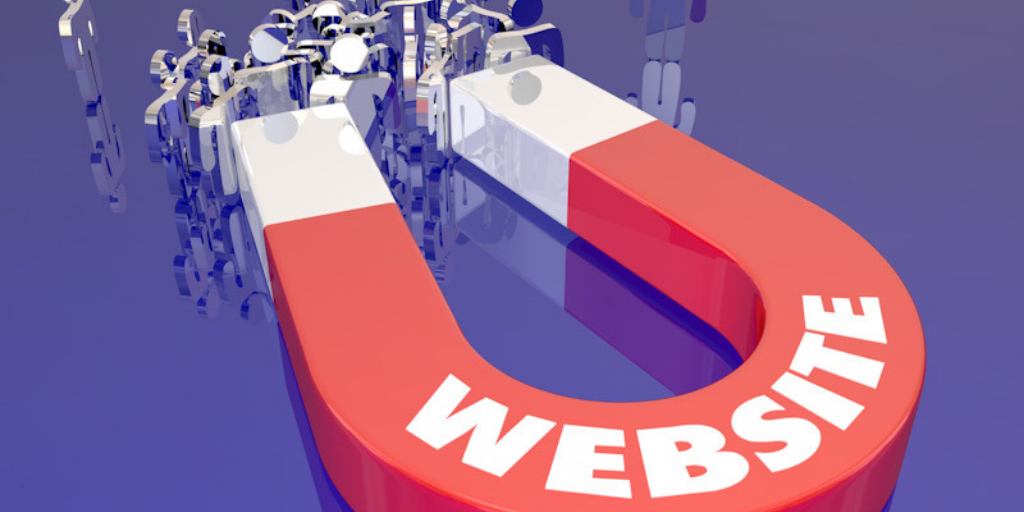 Though Google and Bing both deliver a lot of traffic, the quality of traffic is crucial in maintaining a higher ROI.

Since you pay for EVERY CLICK on your ad, you must make sure a majority of them lead to a conversion, or else you would waste all that money. The last thing that you want is robots, competitors, unhappy customers, etc. clicking again and again on your paid campaigns- leading to click fraud.

Now, here’s a thing- both Google ads and Bing ads have a built-in anti-fraud system that identifies click frauds and refunds the costs as invalid clicks. But the results are debatable here. We don’t know which of them has a better system of identifying and refunding the click frauds.

But when it comes to traffic, research says that an average person visiting Bing spends 35% more online when they shop from their desktops than an average internet user. Google, on the other hand, doesn’t have any such stats. But given the network expansion, Google seems to receive more targeted and relevant clicks than Bing (or any other platform, in that context). 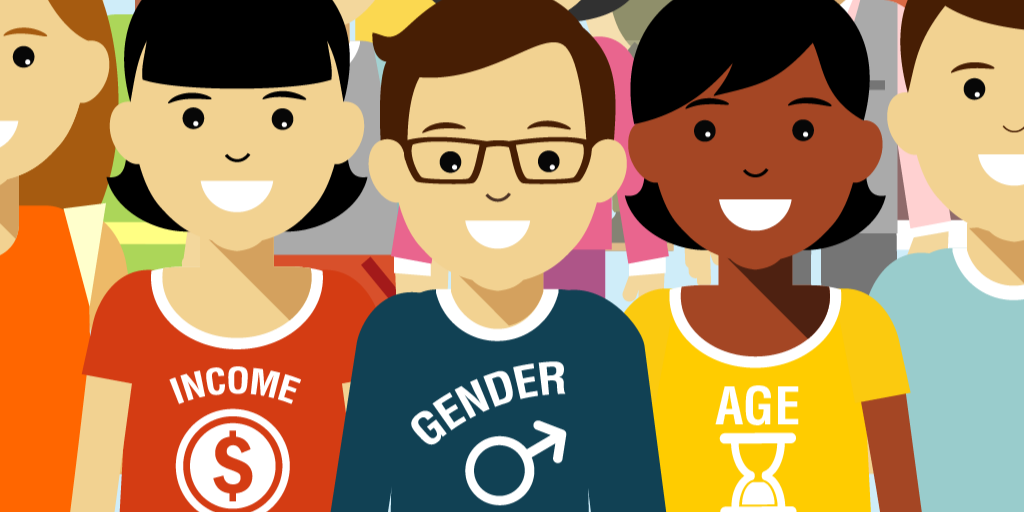 It might sound weird to talk about demographics in the middle of our Bing ads vs Google ads discussion, the two of them being the largest search engines in the world. But don’t you think that the only thing that leads to a precise ad targeting is knowing the demographics?

You must know that young people use Google much more than Bing- meaning, you must prioritize using Google ads when targeting a younger audience. The usage of genders is a 50-50, while 45% of users are above the age of 45.

In general, Google is the primary search engine for a majority of the people- making it more difficult to target the people using Bing.

You can use various tools like PowerAdSpy to find out the type of ads and demographic targeting that come along your competitors’ campaigns.

Here is Demographic Data By PowerAdSpy

There are plenty of regulations regarding the types of ads you can and cannot display on any platform- be it a search engine, web browser, social media platform, in-app ads, etc. But when we talk about these two platforms, Google is more strict, especially because they got a lot of traffic and competition going on.

Here are the types of ads restricted on Google:

As you can already see, some of the restrictions are similar- for instance, adult advertising and political content, but overall, Bing has more relaxation over what to advertise. Google also recently banned cryptocurrency advertising (causing a stir), but unbanned it in a while. 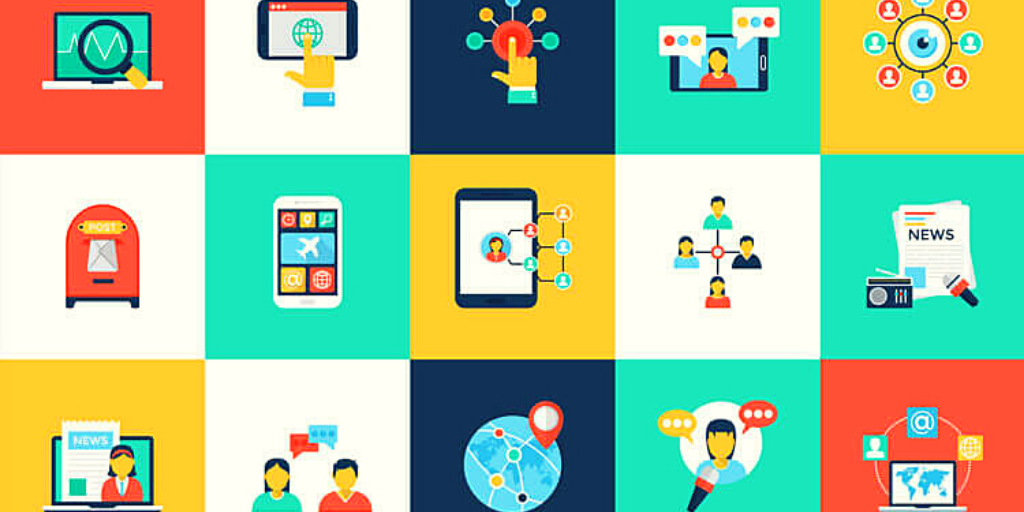 Google takes the trophy of Bing ads vs Google ads when it comes to the variety and types of ads that they offer to the marketers on their platform. Not only do they innovate new ads, but they also innovate them almost every now and then.

For instance, Google comes with call-only ads that appear only on mobile devices and allow the user to click the phone number to initiate a direct call. Bing doesn’t have such cool features. The typ[es of advertising they offer is, thus, very limited.

So, if you’re looking for more than just the search ads, Google is your answer. But if you’re more interested in the results and don’t bother about the variety of ads, you can still stick with Bing. 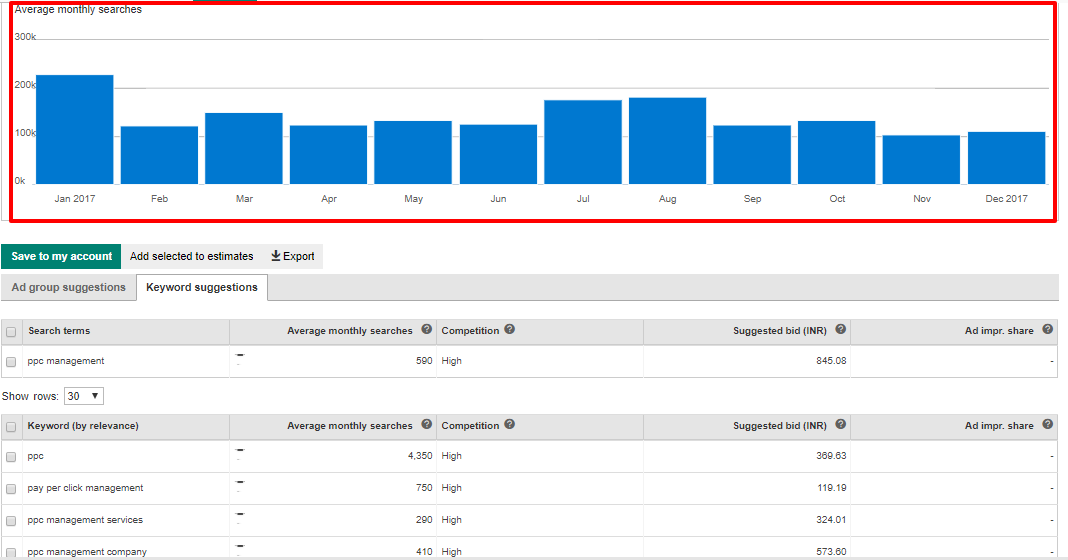 To assist advertisers in their paid search campaigns, many networks offer free and paid tools to make their jobs easier.

Google ads offer its customers their very famous keyword research tool, very effective in researching for the keyword difficulty, competition, search volume, and future trends. Although many marketers stick to tools like AHREFS and SEM Rush, this tool is a go-to for the ones who don’t want to spend a lot.

But Google doesn’t win the game here. Bing also has a keyword planner that lets the users discover the keywords on their platform- thus making it a tie for Bing ads vs Google ads.

There are various other tools as well, on both the platforms that assist the marketers in their advertising campaigns.

How Top Brands Are Leveraging Mobile Ads To Attract High-Quality Customers? How Can You Do It?

Everything You Need To Know About Emojis for Facebook Ads

07 Steps to Engage Your Audience on Social Media

Between Bing Ads vs Google Ads: The Difference

Here’s a chart that summarizes everything that we discussed above. Go through it once to decide which one you would choose in your next campaign. And remember, do not stick to either one of them single-handedly. They work better together. 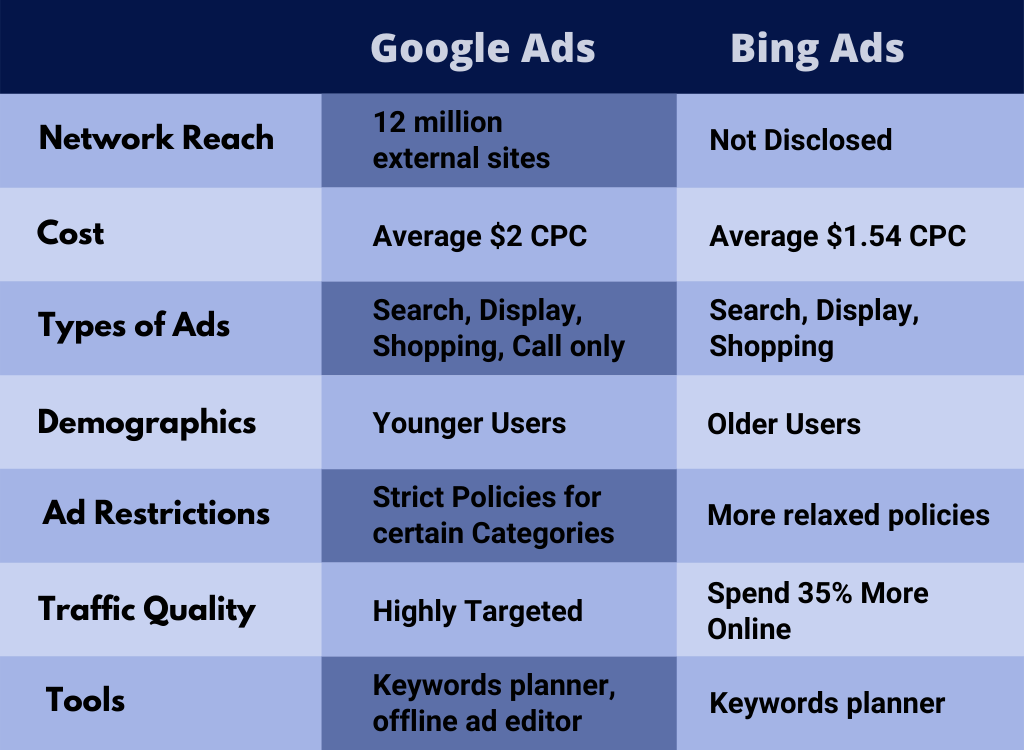 To be very honest, neither of them can overpower the other single-handedly (as we already discussed above). They both come with pros and cons. Google offers a more vast network with better reach, targeting, ad types, and quality audience- leading to higher conversions.

But it is quite expensive and competitive. Bing, on the other hand, costs less, has lesser competition, a higher online purchase rate than an average internet user, and has lesser restrictions on the ad types.

Thus, both of them work together really well when used in accordance with the ad requirements. As a marketer, you must only compare Bing ads vs Google ads when deciding for a particular campaign, and not to pick either of them as a permanent solution for all the future ads.

Do you have any doubt? Did I miss something? Would you like to add something here? Please let me know in the comments below- I would love to hear from you.